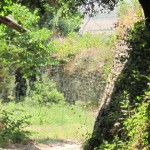 read Mark 4.    In the fourth chapter of Mark, Jesus makes some statements that sound exclusive.  How can we accept a religion that would exclude “outsiders”?

In this chapter, Jesus breaks into parable for the first time.  As in the gospel of Matthew, the first parable he tells is of the seed that falls on different kinds of soil.  When the disciples ask him what the parable means, Jesus tells them: “if you can’t understand the meaning of this parable, how will you understand all the other parables?”  v. 13.  Apparently, this first parable is also a key parable.

To me, the “irritant” in this chapter – the grain of sand that grates on me at first, which, when turned yields a pearl – are Jesus’ seemingly provocative words on why he speaks in parables.  He tells the disciples that they are “permitted to understand the secret of the kingdom of God.  But I use parables for everything I say to outsiders so that the Scriptures might be fulfilled: ‘When they see what I do, they will learn nothing.  When they hear what I say, they will not understand.  Otherwise, they will turn to me and be forgiven.'” v. 11-12.

Those are strange words.  It sounds as if Jesus is saying he doesn’t want the “outsiders” to understand.  It sounds as if he is preaching a religion of exclusivity.  We have a name for that.  It’s called a cult.  But God loves everybody.  How can Jesus say that he permits some to understand the secret of the kingdom of God, but that others are to learn nothing when they hear him?  Does Jesus only love a select few?

There are plenty of ways to try to do “damage control” on these words.  We could hypothesize that the “outsiders” are those who have chosen to disobey.  We could assume that God has “foreknowledge” about who will resist Him forever, and so he only excludes the ones not choosing Him.  I could quote Scripture that says God wants all to be forgiven. But there is plenty of other Scripture that suggests God chooses some people and not others, and that makes us need to tread carefully when we enter this area of God’s sovereignty.

The fact is, God can do whatever God wants to do.  He is God.  That is a concept that we all fight.  But when we accept it, we discover that God enables us to love others in a way that was closed to us when we were fighting Him in the name of other people.  In other words, we SAY we resist God because He is unfair.  We SAY we couldn’t believe in a God who could choose some over others.  But at the very same time as we say that, if we were to examine our own lives, we would discover that we are completely unfair.  We choose some people over others all the time.  We discriminate.  We ignore people who bother us.  We avoid people whom we find boring.  We pretend not to see people who make us feel uncomfortable.  We pretend to like all people all the time – and the moment their back is turned we find ourselves making ugly faces or shivering about something they’ve said.  We are all hypocrites.  We are all two-faced.  We are all unloving.

Therefore, it is highly likely that even though we say we are resisting God because He is unfair, we are most likely resisting Him for another reason.  The Bible teaches that we resist God out of pride.  We want to be our own God.  We don’t want Him telling us what to do.  That doesn’t sound terrific – “I’m in charge here” are words we mock – so we use this idea that God is unfair as a front for our pride.

But weirdly, when we accept God – even though He says these seemingly strange things about how He chooses some people and not others – He gives us a supernatural love for other people.  God enables us to be patient with boring people.  We discover that underneath their wooden exteriors beats a heart as wild as our own.  We can find that the reason for their “boringness” is that they’re dying inside – something terrible has happened in their lives, and the only way they can maintain even a semblance of sanity is by pressing themselves down into automatons.  These very same people can relax in our presence if we meet them with God’s love.  They open up.  They become interesting.

In other words, if we allow God to be our boss, the entire world opens up in a way that we could never have imagined.  And that, it strikes me, is the very point Jesus is making in those cryptic verses.  When we bend the knee to God, we are then “permitted to understand the secret.”  When we refuse to accept God, nothing He says makes sense.

This interpretation, or rather, this emphasis, is supported by the parable itself.  It should.  It makes sense that the  parable of the sower and the seed should hold the answer -because Jesus suggests this parable holds the key when he says that the disciples won’t understand any parables unless they understand this one.

Here’s what the parable of the sower and seed teaches.  The seed is the word of God. When we don’t have deep roots; or we fall away because of problems or persecution; or our thoughts are crowded out by the worries of this life, the lure of wealth, and the desire for good things; then God’s word bears no fruit in us.  In other words, if our hearts are not in the right place, and we resist God’s authority, we can hear what God says, but we will not understand.  Even worse, as the chapter goes on to explain, it’s a downward spiral.  Even what little understanding we had will be taken from us.

But when the word of God falls on good soil – when we hear, accept and obey God’s word – we bear fruit.  We understand the secret of the kingdom of God.  As the chapter goes on to explain, if we listen and obey, God will give us more understanding.  It’s an upward spiral.  His word will grow in us while we’re asleep or awake.  We don’t understand how it grows.  It’s a beautiful mystery.  A teeny tiny little mustard seed grows into the largest of all garden plants; sometimes just one phrase from the Bible can change everything for us.  We’re not in charge of the way God’s word grows in us.  We’re only in charge of how we receive His word.

For whenever I hear the Bible talking about how some are chosen to understand and others are not, the only person I have any control over on that front is myself.  The question I ask is: do I choose to understand?  Am I willing to obey God, even when I don’t want to?

The fact that we humans even have to ask ourselves if we would obey God is astounding.  God is a lamp.  God’s ways are filled with light.  Jesus is Lord over the wind and the waves.  But there is something about human nature that enables us to look at a lamp and still choose darkness.  We can see God’s Son calm a storm, and yet disbelieve that He could calm the storms in our own lives.  We all do it.

But that’s okay.  Here is where we return, once again, to the “irritant” of this chapter – the idea that Jesus speaks in parables so that the outsiders will not understand.  v 11-12.  The reason we can trust a God who says this is that Jesus became an “outsider” so that God could accept all the people who reject Him.  Jesus died on a cross outside the city gates, so that people who were cursing Him could go to heaven.  “Forgive them for they know now what they do,” Jesus asked God on the cross.  And God does.  God can forgive all of us – even though we see God’s light and yet learn nothing; even though we hear God’s word and understand nothing; even though we stubbornly refuse to turn to God and be forgiven.

It doesn’t matter how stubborn we have been, how hard-hearted, or how disobedient.  Jesus has made room for each of us in heaven.  The secret of the cross is that Jesus took the punishment for our pride.  Jesus did it because He didn’t want anyone to be an outsider.  He opened his arms on the cross to bring every outsider in.

If we ask for His help, no matter what we have done, He won’t yell at us.  He won’t say, “I TOLD you so. I told you OVER AND OVER.  Why don’t you EVER listen to me?”  God isn’t like us.  He is kind.  He is the farmer.  He is the sower.  He is the seed.  He is everything.   He scatters his Word wildly.  He is the farmer who sows even on rocky soil. He gives.  All we have to do is be willing to receive: we have to reach the point where we are willing to accept his forgiveness.  He will say: “I’ve been waiting for you.  Come on in.”  What is that, if not lavish, abundant love – available for all?

posted by Caroline Coleman in carolinecolemanbooks.com on December 1, 2011