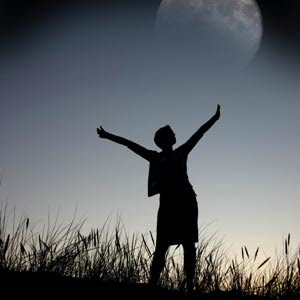 I have been trying to write about Luke 11 for a week now.  Yes, I went skiing in Canada.  Yes, I was surrounded by old friends and new.  But it wasn’t the powdery snow or the good skiing or the fine company that deterred me, but the chapter itself. I kept re-reading this chapter, and trying to understand it, and I kept running dry.

So I was going to write a long academic piece about epiphanies. I was going to quote James Joyce, and throw in a bit of literary criticism, and draw to a close by inviting you to let God lead you to an epiphany of your own.  But that was because I wasn’t having any epiphanies of my own.

And then I watched Crazy, Stupid Love with my daughter and I got it.

What troubled me most about Luke 11 was the story Jesus tells about the naggy neighbor.  Jesus’ disciples ask him to teach them how to pray, so He gives them The Lord’s Prayer, and then He tells them a story about a really rude naggy persistent neighbor.  Jesus said that if your neighbor asks you for a loaf of bread in the middle of the night, you will tell them to go away, and that your kids are in bed with you – but because of the man’s persistence, you will get up and give your neighbor what he asks for.

So I put off writing this and instead watched Crazy, Stupid Love.  At the end of the movie, the 13 year old boy who has had a relentless, unrequited crush on his 17 year old babysitter, finally gets cynical.  He starts to give a graduation speech in which he says there are no soul mates, and that true love doesn’t exist.  His father (Steve Carrell) leaps out of the grandstands, speeds to the podium, and says, “this isn’t my son.  My son believes in grand romantic gestures.  My son believes in soul mates.  My son knows that love never gives up.  My son is right.  Love never gives up.”

The movie credits rolled, and I was still crying, and that was when I had my epiphany about Luke 11.  I wasn’t crying because I was feeling unloved or sorry for myself or abandoned.  I was crying because the movie was affirming something so wonderfully true it’s almost impossible to take in.

But God doesn’t have to give anything to us.  He’s God.  He can do what He wants.  God gives because He wants to.  He gives because it gives Him joy to give.  God never gives up on us.  God is our soul mate.  God made the grandest romantic gesture of all – He gave up his life for us.  And our hearts always, always, respond to these romantic stories of people who believe in soul mates and true love and the triumph of persistence, because we were made in God’s image.  We were made in the image of a God who made people who believe in true love.  We were made by Love, for Love and in Love.

In our world, an epiphany has come to mean any kind of “ah ha” moment, but that is not it’s original meaning.  As Charles Baxter pointed out in his essay “Against Epiphanies,” an epiphany “in a traditional religious context, was the showing forth of the divinity of the Christ chid.  It was, quite literally, an awful moment.  Awe governed it.  To adapt this solemn moment for literary purposes… was a Promethean gesture:  It was an attempt to steal the fires of religion and place them, still burning, in literature.”

If an epiphany is the showing forth of the divinity of the Christ child, an epiphany is when it strikes you, like a stake through a vampire’s heart, that God loves you so much He died for you.  And like that stake through the vampire’s heart, a true epiphany slays us.  A revelation of God’s love kills the meanness, the pettiness, and the miserliness of us.  It strikes dead all that is small in us.  And in doing so, it enables in us the resurrection of Christ himself.

That’s why Jesus rails against his hosts at the end of Luke 11.  He is railing against the way that religious leaders teach that you can be big and expansive and loving all by yourself.  Jesus rails against religion.  He rails against the idea that by following rules – by ordering ourselves to be kind to our neighbor – that kindness can enter our hearts.   It just doesn’t work that way.  We long to be that way.  We were made to long for heroism and true love and sacrifice, but we’re not the hero.  God is.  Our heroism comes when we admit our need for God to be our Hero.  It arrives when we lay down our pride, and ask God himself to help us.  That’s when we who were mute in the face of our neighbor’s needs, suddenly find our voices.  That’s when we hear knocking on our doors, and a voice asking for a loaf of bread, and we leap out of bed, and get our children to let them in, and we cook them a feast.

Why?  Because we know the One who loved us so much that He died so He could prepare a feast for us.  And even when we’re still miserly and pretend we don’t hear our neighbors knocking, God doesn’t give up on us.  God keeps on knocking at the door of our hearts.  Come on, God says.  I know you hear me.  “Today, when you hear my voice, do not harden your hearts,” God said in the Bible.  Did you catch that?  It’s not today IF you hear my voice – it’s when.  God is knocking at the doors of our hearts all day long.  He knows that if we wake up, and get up, and open the door to His Love, no force on earth or in hell can shut that door.