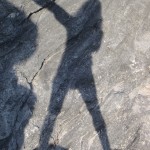 read Matthew 23.   The strange thing about hypocrisy is that it fools no one.  Nothing is more obvious than a person who doesn’t practice what they preach.  No one likes a brown-noser.  People can sense when you’re not interested in them as people, but are instead using them to further your own selfish agenda.  We talk about someone “reeking” of insincerity.  It’s as if we can smell hypocrisy. In fact, probably the only person being fooled is the hypocrite himself.

The fact is, however, that everyone is destined to be a hypocrite.  Why?  Because we preach most loudly when we see in others a fault we have ourselves but aren’t aware of. We’ve all been on the receiving end of this phenomenon.  We can feel someone judging us, with extra energy, about a fault we’ve openly confessed.  “How could you have done that,” they ask. We shrug.  We don’t know how we could have done that.  We’re sinners. We’re imperfect.  But when someone comes at us with that extra energy, it helps to know the person they’re really going after is themselves.  But they can’t see it, because they’re blind to their hypocrisy.

So if hypocrites are truly blind to their hypocrisy, why does Jesus reproach hypocrites with such passion here?  Why wouldn’t he be more gentle with the religious leaders?  What’s going on?

The concept that Jesus is attacking here with such passion is the dangerous assumption that underlies hypocrisy.  Hypocrisy stems from the assumption that a human could be perfect.  Perfectionism, in turn, stems from the assumption that you can and must earn your way to heaven.  Hypocrisy, therefore, is so very dangerous because it teaches a lie.  It teaches a lie that not only crushes humans under an immovable burden of guilt, it also prevents them from finding the one true solution to every problem – the cross.

Jesus is attacking here, therefore, the idea implicit in religion – the idea that you can be perfect by following certain rules.  “Religious” people hone in on a set of rules – ones that it is relatively easy for them to follow – and then look down their noses at other people, who can’t, or don’t, or wouldn’t even want to, live up to these rules.  That’s religion, and Jesus implies it stinks.

To teach that you can go to heaven by following rules is to shut the door of heaven in men’s faces.  It’s to add a burden that God, in his kindness, has taken away.

Instead, the Bible reveals to us over and over the lawlessness and impurity of our hearts.  No one can be perfect.  The harder you try, the harder you will fail. The heart that is open and receptive to God, is not the heart that thinks it’s perfect, but the heart that is sick of its own impurity.  If you say you are without sin, the Bible says, then you’re a liar.  If you admit you’re a sinner, you can allow God to clean you from the inside out.  Instead of being a whitewashed tomb – beautiful on the outside but filled on the inside with dead people’s bones and all sorts of impurity – you can be truly clean all the way through.

The only thing that cleanses an imperfect person is the cross.  The only human who walked this earth who was ever perfect was Jesus.  And that’s because Jesus, although fully human, was also fully God.  Jesus is the only person who deserves heaven, because he followed God’s rules.  But Jesus chose to experience the punishment of hell, so that we don’t have to.

The passion of this chapter, therefore, is the passion of the cross.  As Jesus gave this speech, he knew he was about to sacrifice everything to open the door of heaven.  He was about to die to rescue us from the truth that we cannot properly follow God’s rules.  All he asks is that we accept the protection of the cross.  He longs for us to accept his protection, as he explains at the end of this chapter:  “How often I have wanted to gather your children together as a hen protects her chicks beneath her wings, but you wouldn’t let me.” v. 37 (emphasis added)

The reason the gospel of Jesus is called the ‘good news,” therefore, is that no one who accepts the cross needs to be a hypocrite anymore.  Instead, you can be honest.  You can admit your motives are mixed.  You can admit you do the very thing you don’t want to do. You can admit that you sometimes feel helpless in the face of your addictions and obsessions.  You can be honest with God, and transparent, and you are in a safe place. Unlike a human, who will react with extra energy, God meets our honesty with openness, love and forgiveness.  God opens his wings to us.  He only asks that instead of being self-righteous, we let Him be our righteousness.

posted by Caroline Coleman in carolinecolemanbooks.com on November 11, 2011