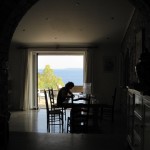 read Matthew 26.  There are two cosmic shifts at work in our lives.  The first is our sense that we are in control of our own choices.  The second is our acceptance of God being in control.  How these two parallel lines intersect is not just an abstract theoretical question, but rather the thing that lies at the heart of our very existence.  It should come as no surprise, then, that here in the chapter where Christ is betrayed unto death, we find how God made those two parallel lines intersect to give us life.

First, the chapter explains that the cross was God’s will.  The chapter begins with Christ telling the disciples that he is about to be crucified.  Christ has a divine knowledge of everything going on around him; even as he explains what the priests will do, the priests are plotting how to capture Jesus “secretly” and kill him.  But there are no secrets from God.  Christ already knows what they’re up to.  We read that Jesus is “aware” of what the disciples are thinking.  Jesus explains that his “time has come”; he understands that the cross is his destiny.  At the Last Supper we learn that Jesus knows that Judas will betray him.  Christ explains that he must die “as the Scriptures declared long ago.”  He explains that his blood is “poured out as a sacrifice to forgive the sins of many”: the cross, he is explaining, is how God forgives the sins of man so that through the death of the only innocent man, God’s perfect justice can be satisfied.  Jesus promises that he will drink the wine “new with you in my Father’s Kingdom”; he knows that once he dies for our sins, we can live with him in heaven.  Jesus  predicts that all the disciples will desert him; he has divine foreknowledge of their sin.  Jesus says he will be raised from the dead.  He explains to Peter the power that he could have unleashed: “Don’t you realize that I could ask my Father for thousands of angels to protect us, and he would send them instantly?  But if I did, how would the Scriptures be fulfilled that describe what must happen now?”  Jesus is fully God, and as such he could have prevented the cross, but instead he accepted God’s will.

It cost Christ everything to do so.  The Garden of Gethsemane reveals that even as Jesus was fully God, he was also fully human.  He was bowed with grief to the point of death.  He didn’t want to die.  He asked God to take this cup of suffering from him.  But ultimately, he prayed that God’s will be done.  And it was.

At the very same time, however, the chapter is heartbreaking in the way it shows humans choosing to kill Jesus.  The leading priests and elders were meeting at the residence of Caiaphas, the high priest, plotting how to capture Jesus secretly and kill him.  Judas betrays Christ with a kiss; who hasn’t been betrayed by a kiss?  The disciples “deserted him and fled.”  You know that broke Christ’s heart. Just because he knew the disciples weren’t up for the job, doesn’t mean that it didn’t hurt him to see them run.  The leading priests were trying to find witnesses to lie about Jesus.  They found “many” who agreed to give false witness.  How horrible is that?  There were “many” people willing to lie about a man who walked among them and healed them?  Why?  What is wrong with us humans?  The crowds “spit” in Jesus’ face.  They “beat” him with their fists.  They “slapped” him.  They “jeered” at him.  Peter denies him three times.  Peter says the very words that I found so chilling to be coming from the bridegroom in parable of the previous chapter: “I don’t even know” him.  Peter says he doesn’t know Jesus?  Really?  Peter doesn’t know his Lord and God?  Every one of these actions were choices that these humans made.  Every one of these sins occurred because a human chose to lie, desert, betray, spit, beat, slap, jeer and disown instead of love.

The chapter unfolds like a novel.  The story is full of transitional phrases: when; at the same time; then; on the first day; on the way; even as; meanwhile; later; and suddenly.  It is a chapter of motion.  It is a chapter of movement. But the biggest movements are not exterior, but the ones that sweep through the human hearts.

Because when Judas asks: “How much will you pay me to betray Jesus to you?”, the question cuts us to the quick.  How much will you pay me to betray God, is the question we all ask each other, throughout our day.  What  is it worth to betray God?  We all have our price.  It’s like George Orwell’s 1984.  If you search hard enough, you can find the thing that will break every man.  You will find your cage of rats.  In the movie Indecent Proposal, the married woman played by Demi Moore spent one night with Robert Redford for a million dollars.  A million dollars was the price that she and her husband, played by Woody Harrelson, put on their marriage.  Many married women would have slept with Robert Redford for free.  We’re cheap.  Elliott Spitzer’s prostitute said, “hey, I get paid to do what other women do for free.”  She’s not wrong.  For men, the price of their marriage might be the $4.99 it costs to rent porn for their flat screens, or the price of a strip club.  For other men, they betray their wives for free by watching it on the internet.  Whether the thing we think we want more than God is sex, love, fame, power, attention, money, security, or power, we will all break.  We all have our thirty pieces of silver.  Each of us has a tipping point.  There is no one who will remain true to God all the time, no matter what.

God deserves to die?  Is that our verdict?

It reveals the depth of our darkness because it reveals that in some strange way, we are “slaves” to it.  As much as we humans want to be in control, we come up against an impossible truth: we are not in control at all, not even of our own choices.  We find ourselves doing the very thing we don’t want to do – over and over again.

Recognizing that is the worst news, and yet it’s the best.  Here is where the parallel lines begin to bend toward each other.  It’s only insofar as we come up against our brokenness, inabilities, weaknesses and lack of control, that we make room for God.  It’s only to the extent that we go through the suffering of dying to our self, and our pride, that we find true life.  When we feel at our worst, it’s actually the very moment in which we become our best.  Our grief becomes transformed into joy, because God grieved.  Christ wept in the garden so that we could return to the garden.

That’s why, at the same time as the chapter breaks the heart, it also holds the promise of a beauty that shines like bright stars amidst the darkness.  Two of those stars are embedded like gems in the text.  First, we see Jesus at the home of Simon “a man who had previously had leprosy.”  There it is.  It’s just a brief phrase, a throwaway phrase, and yet, just that casually, God’s incredible healing power is invoked.  God’s love rises up out of this phrase like incense.  A man who had previously had leprosy is now entertaining.  A man whom everyone once shunned, is now being embraced.  A man whose life was empty is now full.  God heals.  It’s in his nature to heal.  It’s who he is.

The second star arrives in the form of the woman who lavishes perfume on Christ. Matthew doesn’t even name her, although we know from John 12 that it’s Mary, the sister of Martha, the woman who knew that the only place to be in the entire world was “sitting at Christ’s feet.”  She alone, perhaps out of anyone there, had listened to Christ enough to know she was preparing him for his burial.  She loves Christ, and so she does something that we woman love.  She does something beautiful.  Women love beauty.  We just do.  We love to look beautiful.  We love to feel beautiful.  We love to make beautiful things.  We love to see beauty.  And so a person whom Christ has made whole does the only natural thing.  She pours beauty back on Christ.  The passage is bursting with words of lavish extravagance: beautiful; alabaster; perfume; expensive; poured.  Her love for Christ shines like a star, and he praises her for it.  When we receive God’s lavish love, we love back lavishly.

Christ’s birth in our world was announced with a star.  His star rose in the east.  Christ’s departure from our world was also heralded by stars.  But now, by the end of the gospel of Matthew, the stars are humans.  A star came down to this earth, and touched us, and in doing so, transformed us into stars.  The two touches of beauty in this chapter – Simon entertaining, and the woman pouring perfume – come from two humans whose lives Christ has already transformed.  Why?  Because the only way for life to be beautiful, is to allow Christ to come in.

The two parallel lines – human choice and God’s control – intersect at the cross.  God gave up control on the cross, so that we could choose Him.  We were dead in our sins.  We all deserve hell.  No one can cross over from hell to heaven.  So God himself crossed over for us.  In the stunning question the high priest asks – “What is your verdict?”  – the priest is asking us: how do you judge God?  We judge God guilty, the people say.  God deserves to die.  Every time we, in our pride, choose to betray God’s laws, it is as if we are saying, along with Nietzsche, that God is dead.  Gott ist tot.  God deserves to die.  He doesn’t know what’s best for me.  I know what’s best.  And so for 30 pieces of silver, we kill God dead.

But God allowed it to happen, to give us new life.  Ultimately, I can’t really explain how human free will and God’s divine foreknowledge intersect.  I try to consider the issue with grace, remembering John Milton’s cautionary description in Paradise Lost, of the devils “wandering in mazes lost” discussing predestination.  I don’t want to wander in a maze lost.  Because ultimately, I don’t really care.  All I know is, I try my best, and I fail.  And every time I fall flat on my face, God lifts me up, dusts me off, tells me I’m beautiful, and sets me back on my feet.  And I love him for it.

posted by Caroline Coleman in carolinecolemanbooks.com on November 16, 2011