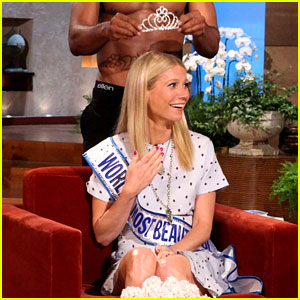 read 1 Corinthians 5.   My daughter says you know you’ve made it when people start attacking you.  Look at poor Gwenyth Paltrow, she said.  The moment People Magazine named her the Most Beautiful Woman of the Year, people got out the boxing gloves.

The problem, of course, is that poor Gwenyth Paltrow is so beautiful.  Her sexy rocker husband Chris Martin seems to think so:

Look at the stars,
Look how they shine for you,
And everything you do,
Yeah, they were all yellow.

I came along,
I wrote a song for you,
And all the things you do,
And it was called “Yellow”.

Of course, Yellow is about more than just Gwyneth Paltrow.  Chris Martin tapped into a truth we all sense.  Every now and then we look up at the night sky and know that every star is a blessed candle lit only for us.  We know nature is anything but indifferent.  We know it’s a testimony of God’s incredible love for all of creation and especially us.  We know God adores us.  We know He sees us as the most beautiful person He’s ever made.  We know He forgives us.  We know He’s kind.  We go to sleep feeling in love with Him, and we wake up in the same state of mystical ecstasy.  We float through the day in a sea of thankfulness.  We enter into every second of our lives like it’s eternity.  We expand our horizons with prayer and praise.  We cast off all our complaints, criticisms and petty hurts like the ill-fitting coats they are.  We comprehend what it would be like to never compare ourselves to others, not even Gwyneth Paltrow.  We celebrate her beauty instead of being threatened by it.  Freedom rises.  Doors swing open.  We feel the breezes blowing through our hair.  We hear the Hallelujah chorus exploding from every cloud.  We start to echo Molly Bloom ….

And then the moment passes and we go back to just being us: NOT the most beautiful woman in the world.

Where did she go?

By the way, if you have no idea what I’m talking about; if you’ve never felt every day open up into eternity, or known the peace that passes all understanding, or felt your heart melt with the joy of God’s presence, all you have to do is ask.  God will give you Himself.  He promises to give us anything we ask if it’s in His will, and He longs for us to know Him.  Jesus died to restore us to heaven, and all the love, beauty and perfection of God comes and “homes” inside us if we repent and put our trust in Him.

Each of us is only a prayer away from heaven.

So back to eternity.  Even those who have tasted the manna and know the perfection of the unleavened white coriander honey wafer we know as Jesus Christ, constantly return to the leavened bread of the world.  We know that wickedness looks rich but is puffed up with nothing but hot air.  We know evil – whether it’s gossiping or slandering or a whole list of other bad things we all do – doesn’t satisfy.  We know God offers us food we don’t have to pay for, because He already paid for it on the cross. Everything we really want God offers for free.  But over and over we find ourselves choosing instead to throw all we have into trying harder to prove ourselves, to buy our own moldy bread, to beg borrow or steal our way into the things we think we want, and then we hate on ourselves and others when it doesn’t work out the way we hoped.

So how do we get that joyful peaceful feeling back into our everyday lives?  How do we return to the well-watered gardens of life with God, after wandering around barefoot in a desert looking to other tattered prisoners to satisfy us when they’re as starving as we are?  How do we return to God?  Does God allow U turns?

We humans are the ones who so often don’t.

Here’s what I mean.  Today’s chapter of 1 Corinthians threw me for a month long loop because Paul says here that the church in Corinth needed to throw out of their fellowship a man who was committing incest.  He says that while a believer in Jesus should NEVER judge anyone who is not a believer, no matter what evil they commit, the believer is to throw out of their fellowship someone who claims to be a believer and yet is in an incestuous relationship with his stepmother.  Paul says the church should call a meeting and pass judgment on the incestuous man in the name of the Lord Jesus.  He says they must “throw this man out and hand him over to Satan so that his sinful nature will be destroyed and he himself will be saved on the day the Lord returns.”  1 Cor. 5:5.

Well, a friend said.  Paul must be talking only about egregious activities like incest.  “He must,” I agreed.  “Or else it wouldn’t make sense.”

But then I looked at what the chapter says, not what I wanted it to say.  Paul doesn’t limit this exclusion to just incest.  He says: “you are not to associate with anyone who claims to be a believer yet indulges in sexual sin, or is greedy, or worships idols, or is abusive, or is a drunkard, or cheats people.  Don’t even eat with such people…. as the Scriptures say, ‘You must remove the evil person from among you.'” 1 Cor. 5:11-13.

I was confused.  How would this work in practice?  It seems ripe for abuse.  Don’t even eat with someone who is greedy?  Remove from among you someone who is abusive?  Asking Christians to judge believers in their church seems to risk bringing out all the self-righteousness that Jesus came to expose.  No one is perfect.  We all fall prey to sin, including at times the sins named here.  How could this be?

In my experience, it’s only after we submit to God’s authority that it starts to make sense.  In the case of this chapter, for instance, it was only after I accepted the supremacy of this chapter that I saw why it made sense.  It didn’t make sense when I looked at it the way a human would.  But God’s ways are not our ways.

Here’s what I forgot: God can allow people to suffer the consequences of their choices – such as exclusion from fellowship – and then God restores.  Unlike us, God accepts people back the moment they change their heart.  God forgives.  God doesn’t hold a grudge.  Implicit in this chapter is that grace welcomes back the repentant.  So Paul says sinning believers may be excluded from a fellowship to protect the “sincerity and truth” of the fellowship and also to restore the cheater or abuser to that same sincerity and truth.  It’s not necessarily to keep them out forever.

That’s the funny thing about God’s truth.  It’s so simple we overlook it.  Exclusion is never forever unless the person chooses to ignore God’s laws forever.  And just as God allows each of us to return to Him no matter where we’ve been or what we’ve done, He wants us to offer each other the same grace.  Yes, trust has to be earned.  But grace and forgiveness never do.

That’s one of the ways we become the most beautiful person in the world.  By forgiving the way we want to be forgiven.  And by trusting God’s ways instead of our own.  We step out in faith and accept all God wants to give us instead of trying to figure it out on our own.  That’s what makes the stars shine for us.

And that’s why the songwriter of the world came along and wrote a song.  He wrote a song just for you.

He’s singing it all the time.  If we start to listen to Him instead of ourselves, we’ll hear the Hallelujah chorus explode wherever we are.  The angels will silence all the voices of hate, and comparison and self-righteousness.  All we will hear is God singing that He sees us as the most beautiful man or woman in the world.  Relaxing into His love and basking in His delight in us is the unleavened bread that starts to make our own ways of feeling better about ourselves taste like sawdust. It enables us to obey God even into the unpleasantness of sometimes shunning hypocrites without falling prey to the lie that we’re any better than they are.  Or even to being shunned ourselves, without having to hate or look down on the people who exclude us for our own good.  All believers are under the beauty of grace, no matter what.

It was all yellow.

by Caroline Coleman in A Chapter a Day