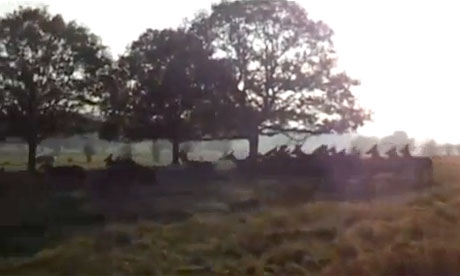 read Acts 7.  A video that recently went viral begins with someone filming some peaceful deer grazing in Richmond Park.  All of a sudden, you hear the sound of stampeding deer hooves.  Then you hear a desperate man yell, “Fenton? Fenton! Fenton!  Fenton! Fenton? Fenton! Fenton?”  The deer hooves pound louder.  The man yells, “FENTON??!!!”  He takes the Lord’s name in vain, twice.  And then the deer stampede past the camera with a golden retriever tearing after them.  The man screams “FENTON!!!!!” and finally the man goes racing after, still yelling, his tweedy coat flying.  Fenton chasing deer video.

We laugh because we’ve all had our Fenton moments – trying fruitlessly to stop our wild beasts from doing something really stupid.  We also laugh, I think, because we all know what it feels like to BE Fenton – to tear recklessly through a park, ignoring the call of our master, because our prey is so vulnerable, so defenseless, and so very chase-able.

What can stop the Fenton in us?  Yes, punishment works sometimes – knowing we’ll be deprived of our biscuits, or worse.  But what ALWAYS works?  As Dale Carnegie explains in his timeless pragmatic masterpiece, How to Win Friends and Influence People, if you want someone to do something, you have to show them how they should WANT it, too.  It does no good to tell a human that YOU want it.  We humans are just too selfish.  Instead, in order to give up something we want, we need to know, really know, that our master is promising something EVEN BETTER than stampeding deer.  I hope that got your attention.  It got mine.  Because honestly?  If I were a dog, making an entire parkful of deer stampede in front of me sounds really, really fun.

I think that’s why when the high priest asks Stephen if the accusations against him are true, Stephen doesn’t answer.  Instead, Stephen takes them through the story of how God rescued His chosen people, the Jews.  Acts 7.   It’s as if Stephen is urging his listeners to abandon their jealousy and instead to come on up and admire the view.  Stephen tells them stories of how God anointed certain people to rescue His people – and how they resisted being rescued.  Instead, they reacted with jealousy and suspicion – fighting the very ones sent to save them.

It reminds me of the first thing we’re taught in swimming lessons – if we’re drowning, we’re supposed to lie very very still in the water.  We’re not supposed to clutch and flail at the person who comes to rescue us – or we’ll end up drowning both of us.  Staying still requires the quieting of our fear.  It requires trusting the one who came to rescue us – or at the very least, realizing that kicking against them is the worst possible thing we could do.

Stephen concludes his history lesson with a stern reprimand:  he tells his listeners that they’re stubborn, deaf and blind to the truth.  He says they’ve killed every prophet God sent to them, even the Messiah.  He asks why they break God’s laws, when it was given to them “by angels.”  I love that – the idea that angels gave us the Bible.  I picture angels whispering in the ears of God’s chosen prophets.  And Stephen asks why his listeners “resist” the Holy Spirit.

What does that mean to resist God’s Spirit?  I can give you a lot of analogies, but my guess is you already know.  If you’re in a river or ocean, for instance, you can feel the current tugging you a certain way – and it takes a lot of effort to swim against the current’s pull.  That’s what it feels like to resist the Holy Spirit.  If you’re in a car and your GPS wants you to go left and you plow on, your GPS will screech: “turn around, when possible!!!!!”  That’s what it’s like to resist the Holy Spirit.  When you cluck at your horse to move it from a trot to a canter, and instead the horse snorts, lowers its head, and you hear the annoying sound of its teeth ripping at dandelions – that horse is doing what we do when we “resist” God’s Spirit.  It’s choosing weeds over cantering.

Their reaction was to shake their fists at him in rage.  They put their hands over their ears.  They rushed at him, dragged him out of the city and stoned him.  His accusers laid their coats at the feet of a young man named Saul.

And what happened to Stephen during all this?  Heaven opened.  Literally.  Stephen cried out that he could see the glory of God, and Jesus sitting at the right hand of God.  As Stephen died, he cried out the same prayer of forgiveness and love that Jesus did when he died – “Lord, don’t charge them with this sin.”

What could cause Stephen to want what God wanted in his dying moments? What could make him ask God to forgive his murderers, rather than tar and feather them?  The answer is in the same chapter – Stephen could see something he wanted more than revenge.  He could see love, really literally see it, and so he knew, in his very soul, that love is better than hate.  Stephen is a man like us; a saint in the Bible is not someone who is perfect, but someone whose sin is taken away because they’re sorry and ask God to forgive them through the cross.  Stephen, therefore, is the kind of saint any of us can be.  Stephen’s kind of love is ours for the wanting, ours for the asking, ours for the kneeling.

How do I know?  Because look at the lovely reassuring hint of God’s grace here in this chapter.  That same young man Saul – the one who accepted the cloaks of Stephen’s murderers –  is about to become Saint Paul – Paul the evangelist – Paul the writer of epistle after epistle.  Jesus died for Paul’s sins and He died for ours.  God knows our every Fenton moment – the obvious ones caught on video for all the world to see that go viral to our shame – and the buried ones the ones that only we and perhaps a few others know about that threaten to drown us.  Jesus knew them all when he went on the cross, and He did it anyway.  We never earned His love.  We couldn’t have.  He freely gave it.  He gave everything.  He drowned so we wouldn’t have to.

God asks only that we stop resisting the call of His love.  He knows we’re selfish.  He doesn’t threaten us with whippings.  He doesn’t force us by yelling.  He never huffs and puffs after us with His tweedy coat flying.  He doesn’t mouth obscenties.  Instead, God surrounds us with the currents of His love.  He cloaks us with winds of His glory.  He whispers to us of the most excellent way.  He coaxes us.  He buffets us with tides of joy and peace.  His Holy Spirit is speaking to us, all of us, every day, wanting to be with us.

God asks only that we lay our stubborn doing down, and give in to the gift of spending eternity in His presence.  He asks that we surrender to the call of love.  He wants us to admit that by following the devices and desires of our own Fenton-hearts, we’re drowning.  He begs for us to relax into His outstretched arms.  He wants only to lift us out of the water, and send us forward, cantering into the wind with joy unleashed.  He wants us to be with Him – because that is to be a saint.  To be with God.

If we do, we’ll discover that giving in to God’s love is what we really wanted all along.

by Caroline Coleman on September 25, 2012 in A Chapter A Day, carolinecolemanbooks.com