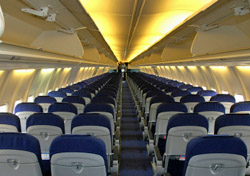 read Luke 22.  The moment we reached cruising altitude on my flight back from Palm Beach this morning, I put my seat back.  The woman behind me kicked my seat, three times.  I pretended not to notice.  So she tapped me on the shoulder and asked me to put my seat back up.  My first thought was, “are you KIDDING ME??!!!”  I swallowed that thought, and pointed out that perhaps she could put her own seat back.  She explained it didn’t go back.  Her mother said, “she has long legs.”  I almost laughed.  My legs looked just as long as hers.  Every bone in my body wanted to ignore her and keep my seat back as far as it jolly well could go.  But there was a problem.  I had a Bible open on my lap.  I couldn’t, just couldn’t, react in anger with that Bible staring up at me – at least not with a woman sitting beside me to witness the whole thing.  So I moved my seat most of the way back up, which actually was perfectly comfortable.  Then I took a moment to exhale, turned around, smiled at her, and asked if that worked for her, too.  She smiled back.

I don’t think I’m all that different from anyone else.  When I compromised for her, there was little goodness in my heart, trust me.  I reacted in anger.  In the moment she asked me to put my seat up, I was internally thinking of her as an “idiot” – something Jesus said meant I was murdering her in my heart.  I think I was.  I only helped her out of pride – it looked bad to the woman sitting next to me if I’m reading the Bible and failing to give sacrificially to someone.  But the miraculous thing was that when I actually obeyed God – out of selfish motives alone – it felt good.

Now, what if instead of muttering under my breath, I had turned around and suffocated the woman with her air sickness bag?   Would I still go to heaven?  Does God distinguish between sins?  I ask this because a Catholic friend called me yesterday to ask if I had seen Oprah’s interview of Joel Osteen.  My friend was shocked that Joel said God doesn’t distinguish between sins.  “How can he say that,” my friend asked.   “Is a child stealing a piece of chocolate cake behind his parents’ back the same as murder?”

The Biblical answer is yes, all sin is the same – for purposes of heaven.  You don’t need to look any further than the Garden of Eden.  What got Adam and Eve kicked out of the garden?  It was my friend’s very example: they ate the wrong thing.  They ate an apple.  It could have been chocolate cake.  The problem was that they disobeyed God.  And while we need to repent of our sins to go to heaven, I KNOW we don’t repent of every single sin we commit.  I know this because God has shown me how we sin all day, every day, and most of the time we’re not even aware of it.  In fact, the only reason I was even made aware of the darkness of my thoughts toward the woman behind me was because I was writing this blog.  If I hadn’t, that particular moment of sin – a “thought murder” – would have gone unrepented.

So when Joel Osteen said that God does not distinguish between sins for purposes of salvation, it SHOULD shock us.  But the shock is the scandal of the cross.  The shock is to our pride.  We LIKE to think God should distinguish between sins – because well, then, we can think we’re better than other people.  We LIKE to think God looks at whatever our sins are, in an affectionate fond indulgent light, and He looks at other people’s sins with condemnation and horror – but that’s not how it works.  Yes, of course, for purposes of our justice systems we need to distinguish between crimes by, among other things, the consequences that they cause to other people.  But for purposes of heaven, God does not draw these distinctions.  God knows that all our sins have direct immediate consequences to our hearts.  All sin stems from the same pride to which Adam and Eve succumbed in the garden of Eden – the pride of thinking we know better than God.  This pride, our sin, “separates us from God.”  Isaiah 59: 2:

All this brings us to the scandal of Luke 22.  Here is the heart, mystery, shock and beauty of the cross.  God allowed the “powers of darkness” to reign for a “moment.”  Luke 22:53. God allowed himself to be killed on the cross, to suffer the punishment we deserve, so that we, who are all imperfect, could live in heaven with a perfect holy God.  That’s why Jesus can tell the disciples “I now grant you the right to eat and drink at my table in the kingdom,” even though in the very next verse He tells Peter how Peter is about to betray Him.  Luke 22:30-34.  The scandal is that we can go to heaven, even though we are so utterly selfish.  Luke 22:27.

Paradoxically, it’s only when we admit the depth of our selfishness, that true joy can flood us.  When we resist God, we are always restless, always anxious.  When we accept the truth about ourselves – that our hearts are more selfish than we care to admit, but God loves us more than we dare to believe – we can have peace.  The peace comes, like all good things, through the cross.  It comes from understanding that God loves us so much He “reconciled” us to Himself through the breaking of his body, and the pouring out of his blood.  He reconciled us to him through this “holy communion.”  We, like Peter, will betray God, and run after other gods, the moment the words “God you can count on me,” are on our lips.  We can’t help it.

God knows this.  He knows, and He loves.  When we invite God to be our Lord, He will begin to change us.  He will melt our hearts with His love.  His Holy Spirit will work on us, in the same beautiful moving way we see the Spirit work on Peter here.  Peter betrays Christ three times – with expletives, and outright denials – and then… “the Lord turned and looked at Peter.”  I know that look.  Jesus has looked at me the very same way.  It’s a look of love and disappointment and truth and majesty.  When we see that look, God’s words flash through our minds, the same as it did for Peter here.  If we have lied, for example, we will hear a verse in our heart about how God doesn’t want us to lie.  We, too, leave the scene of our crimes “weeping bitterly.”  Luke 22:61-62.  The good news is, weeping lasts for a night, but joy comes in the morning.

That’s how it works.  We want to prove ourselves to God.  But we betray God.  God looks at us in love.  We recall his  Word.  We weep.  God restores us.  Through the scandal of the cross, He makes us more powerful than before.  The very thing that Satan hopes will destroy us, is the thing God uses for His glory.  Satan asked to “sift” Peter like wheat here – and God allowed it, because He knew that the restored Peter would be infinitely more powerful than the proud Peter.  When we get to the book of Acts, we will see this – Peter, an uneducated fisherman, blows onto the scene in power and might, healing and preaching the Word in a way that stuns his hearers – and brings thousands into the kingdom.  Why?  Because Peter failed.  Peter succumbed to sin – just as we all do – and yet in repenting, and clinging to Christ, God restored Him.

God will do the same for us.  All we have to do is stop distinguishing between sins.  We have to abandon the myth of thinking our sin is “less bad” than other people’s sins. We have to stop deluding ourselves into thinking our hearts are less bad than anyone else’s hearts.  And Jesus will “look at us.”  His words will “flash through our hearts” and His power will be made perfect in our weakness.  God will use the very thing in us we despise to make us mighty and powerful in His service.  He will crush our proud spirits, and make us humble, so that we become willing to serve others, to actually love them, and to embrace them.  And they, in turn, will embrace us and give us the love we’ve always longed for, but were isolated from in our citadels of pride.  That’s why we need to embrace the scandal of the cross, just as Jesus did.  The cross is ugly – Jesus asked God to take this cup of suffering away.  But he cross is beautiful – just like redemption – because it was God’s will.  The cross can take each of us to the very best place of all.  The cross can give us a soft heart that is able to serve each other not to glorify ourselves, but in the power and might and joy of the perfect, mighty and loving King.

posted by Caroline Coleman in carolinecolemanbooks.com on February 27, 2012